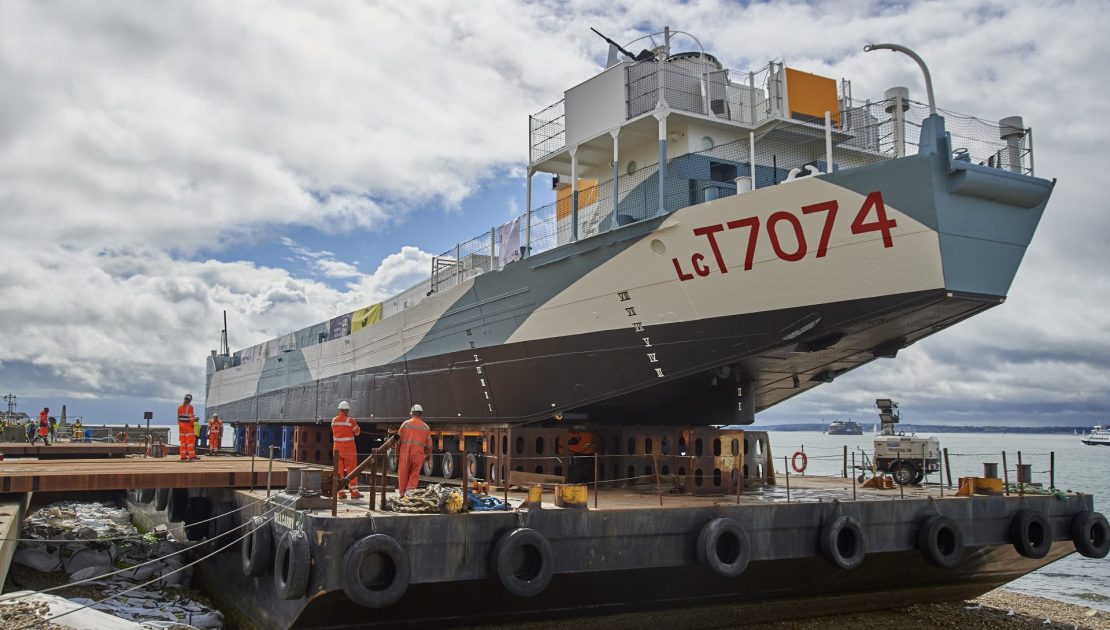 Sometimes a project comes along which is all consuming, technically, mentally and emotionally. LCT 7074 is just such a project for Artelia’s heritage team. The rescue of an unsung D-Day hero, a vast ugly duckling of a ship with no grace or finesse, but whose gritty performance and crews were unfathomably brave and whose contribution in June 1944, carrying tanks and other heavy armoured vehicles onto the Normandy beaches, helped altered the course of World War II.

This week saw Artelia PMs, Steve Prowse and Ross MacAskill executing a plan of similar military precision – not a new experience for former Royal Engineer, Steve – as they co-ordinated LCT 7074’s final sea journey from Portsmouth to her new home at the D-Day Story in Southsea. A mission fraught with risk and not helped by the arrival of some unseasonal summer storms!

Artelia was first introduced to LCT 7074 by the National Museum of the Royal Navy (NMRN) in 2014, when she was lying semi-derelict and sunk at her moorings at East Float Dock, Birkenhead. Following the Second World War, she had been decommissioned and later converted into a floating clubhouse and nightclub – a familiar sight on the Liverpool waterfront, known as “Landfall”.  The Warship Preservation Trust had attempted to conserve her in the 1990s, however efforts ceased when the Trust went into liquidation. LCT was now lying in private hands and on the brink of deteriorating beyond repair.

As the last remaining Landing Craft Tank from D-Day, NMRN compiled a bid to save her for the nation and with the help of a grant from the National Heritage Memorial Fund, Artelia project managed the complex salvage operation to refloat her and transport her by sea to Portsmouth Naval Base for restoration.

Since 2015, LCT has resided in the enormous ship fabrication hall in which the Royal Navy’s two new aircraft carriers were built, undergoing an extensive £1.3 million repair and conservation programme, supported by the National Lottery Heritage Fund (NLHF). She has been restored to her original state, including an external paint finish which brings back the original disruptive pattern used for camouflage and replacement guns and rocket launchers.

The overall NLHF LCT 7074 project had a budget £5.9m and over the past eighteen months, Artelia, as a multi-discipline PM, QS and design team has also overseen the design and construction of an iconic steel fabricated structure that will support, display and protect LCT 7074, outside the D-Day Story museum at Southsea, where her scale can be appreciated and her story shared with visitors of all ages.

With conservation complete and display structures constructed to receive her, LCT 7074 was ready to be moved by specialist sea and road transport from Portsmouth to Southsea.

As you can imagine, moving a 220 tonne, 59 metre long and 10m wide heritage vessel is difficult enough but then transferring her between the land, tidal waters and floating platforms is fraught with difficulty and complexity.  Tides need to be aligned with suitable weather conditions, buoyance and imposed stresses and strains, road closures and public safety all need to be considered in detail. The Artelia-led team played and replayed multiple risk scenarios to meticulously iron out every detail.

Steve notes that as PM it can be nerve racking co-ordinating unique projects like this, but cannot compare in any way to how the incredibly brave soldiers must have felt on the deck of LCT7074 as she was about to land on the Normandy beaches.  When you look onto the tank deck it doesn’t take much imagination to visualise the deck full of machines and young soldiers staring at the bow door, just waiting for it open and see the beach ahead of them.  Our team has been driven by a real sense of “we must make this happen” to help tell those stories and in a small way show our gratitude for their bravery and for some, the ultimate sacrifice.   I’m extremely proud and honoured to have been part of this unique mission.

Artelia is privileged to work with NMRN to conserve and put on public display, this most unique maritime treasure. She is a fitting addition to the D-Day Story and well worth a visit!

Any cookies that may not be particularly necessary for the website to function and is used specifically to collect user personal data via analytics, ads, other embedded contents are termed as non-necessary cookies. It is mandatory to procure user consent prior to running these cookies on your website.